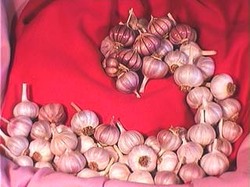 Overview of The Creole garlics

The Creole garlics are a unique and truly beautiful group of garlics that were cultivated in Spain and spread through the Conquistadores. They are utterly unlike the other garlics in appearance and clove configuration as well as color. Although they were formerly thought to be a sub-group of Silverskins, the latest DNA studies show them in a separate class by themselves.

They are downright gorgeous to look at and are one of the easiest eating raw garlics owing to a taste that is full but pleasantly warm rather than hot. They retain a garlicky flavor well when cooked. They have eight to twelve cloves per bulb arranged in a circular configuration. While the bulb wrappers are very white, the clove covers vary from a beautiful "red" rose color to dark purple and present a spectacular appearance. I regard them to be at least as beautiful as the porcelain garlics even though their configuration is very different, their colors are breathtaking.


The size all Creole garlics grow to depends on where they grow as they require as much direct overhead sunlight as they can get.  Most of them have grown in the Caribbean area the last 500 years and they get real big when grown down South but rather small when grown in the north because they cannot get the intense sunlight they need.

Creoles are easily grown in southern climates and anywhere in USDA hardiness zones 7 through 10 and are much more tolerant of adverse weather conditions than most garlics. Creoles can be large garlics but they're hardy survivors and can grow where many other kinds can't.

They are ideal for California and the warm winter west coast as well as Texas and the Old South.

The story about our Creole garlics bears retelling. Over the years we have become one of the few sources of the rare and expensive Creole garlics because they grow better in the warm winter areas than they do in the colder North. We have slowly increased our holdings in these rare garlics which were developed in Spain and southern France over the centuries, rather than Italy or elsewhere; they were different altogether and they came in with the Spanish Conquistadores in the 1500s, hence the name Creole, which relates to the Caribbean.

As explained in earlier parts of our newsletter, we hit 100 degrees on April 15 one year, badly stunting our crop of rare Creoles and a few Artichokes. Our bulbs wound up being about 1/3 to 1/4 their usual size but almost all survived. We had accepted about a hundred orders of Creoles in anticipation of our usual large crop and offered our customers an opportunity to cancel. Almost all said to go ahead and send those hardy little survivors, we want them anyway. They got a pretty good bargain because there were 2-3 times more bulbs in a pound this way and if you plant them early and leave them in the ground and extra week or two, they'll size back up in a couple of years and they'll have a lot more then. Everybody won. I wound up with some pretty good planting stock and continue to get a nice-size crop every year.

The bottom line to our Creole story is that regardless of the disasters that have befallen us, the hardy Creoles have survived, getting smaller in lean years and growing large and robust again with consecutive good growing seasons. It would be hard to ask much more from a beautiful and delicious long storing garlic that flavors food, has fabulous health benefits and can be worth a lot of money to those who grow it to good size by taking care of it.

It is my intention to cultivate an interest in people all across the Gulf coast, especially Louisiana and get them to grow these wonderful garlics not only for personal use but for profit as part of an economic rebirth in a area that sorely needs it. Why grow something that sells for $2 to 4/lb when with only a little extra effort you can grow something that sells for several times that and have people lining up to buy it? I think that once some of those New Orleans chefs find out about these Creole garlics, they will create an even greater demand for them and people will have yet another reason to come to Louisiana and plan on spending some extra money on something they really like.

I also think that in the future the Creole garlics, currently almost unheard of in Louisiana, will become a very big part of Creole cooking and cuisine and part of the uniqueness of it all. Are you listening, Chef Emeril and all the other New Orleans chefs? Your future is calling. Creoles are among the rarest and most expensive of garlics and with the name of Creole, where but Louisiana would you expect them? The name might make you think they're grown there but they are not, it's just their name. If I do my job, they'll eventually be growing in profusion there and providing more economic opportunity for many as well as some great eating that you won't forget anytime soon.

We feel very fortunate to have any of these extremely rare treasures at all. Creoles are among the scarcest of all garlics.

Creoles are very rare garlics and we have sometimes had to ship smaller than preferred sizes because small Creoles are better than no Creoles. We have saved the biggest and best for replanting and expect to have at least some good large Creole garlics.

The Creole Garlics of the South of France.

We have added the delightful garlics from the South of France to our collection. In the past we have had some of the rich tasting Rose du Lautrec and the pleasantly mild Germinador that we hope to be able to make available by the pound someday along with some Thermadrone (an Artichoke garlic) and Rose du Var (Silverskin).

Our French Germinador garlic is in low supply but we hope to someday again grow them in large quantities  again in a few years. The good news is that the Rose du Lautrec is surviving nicely and we may be able to include some of them in Creole assortments this year. The weather has been pretty weird around here since the turn into the 21st century, alternating between drought and flooding but still our Creoles find some way to survive.