The Artichoke Variety of Gourmet Garlics 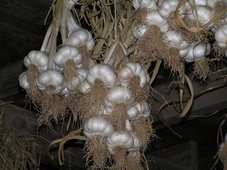 
Artichoke garlics (sativums or softnecks) are the kinds of garlics that used to be in supermarkets seen most in our part of the country.  These days what you see is an Asiatic garlicthat has been irradiated from China.


California Early and California Late were grown in huge quantities around Gilroy, California and shipped all over the country and are the generic garlic that most people think of when they think of garlic. In fact, most people around our parts weren't even aware that there was more than one kind of garlic. Artichoke garlics are the easiest to grow and seem to be less fussy about growing conditions than the others and do well in warm winter locations. They have lots of cloves, usually somewhere between 12 and 20, with lots of smaller internal cloves. These are a favorite among people who want to use only a very small amount of garlic in a dish (although I can't imagine why). They appear to feel that if you can taste the garlic in a dish you have used too much and prefer to use the small inner cloves.

Artichokes are generally very large, store well and have a wide range of flavors with some, like Simoneti and Red Toch, being very mild and pleasant and others, such as Inchelium Red and Susanville, have greater depth of flavor.  California Later and Lorz Italian are much stronger and stick around for a while.

Artichoke Garlics are the commercial growers favorite because they are easier to grow and produce larger bulbs that most other garlics. Artichokes are often called red garlics or Italian garlics despite the fact that most are neither red nor were ever grown in Italy. Most of the artichokes that have red as part of their name have no red in them, but we retain the word as it helps to describe exactly which cultivar we are discussing.